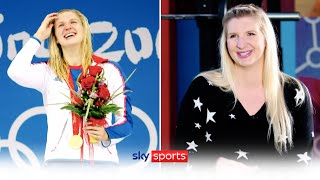 Rebecca Adlington is known for swimming success in the 400m and 800m freestyle. Claiming the World Record for the 800m freestyle in 2008, Rebecca now focuses on her Swim Star school and shows her support as a Patron of Women in Sport and an Ambassador of Encephalitis Society. Booked as a female motivational speaker for events, Rebecca is sought to share the successes of her swimming career and empowers women to get into swimming.

One of Britain’s most decorated female swimmers, Rebecca was the first Olympic swimming champion in Britain since 1988 and the first British swimmer to claim two Olympic golds since 1908. Her first major win came at the 2008 Beijing Olympic Games, taking home two Olympic gold medals in the 400m and 800m freestyle. She was also highly successful in the Commonwealth Games, claiming two gold and two bronze Commonwealth medals. Having also claimed gold at the 2011 World Championships, gold at the 2010 European Championships and set British, Commonwealth, European and Olympic records of 8:18.06, Rebecca is widely admired as an inspirational female athlete.

Since retiring from swimming, Rebecca has set up her Swim Stars swimming school with whom she is passionate to achieve the goal of all children being able to swim 25 metres. She has also appeared on I’m A Celebrity… Get Me Out Of Here!, The Jump and Masterchef. She has also been appointed OBE by the Queen and received the award of Sports Journalists Association’s Sportswoman of the Year 2008.

Rebecca has also since become a popular choice as a motivational female speaker for events. Throughout her career, Rebecca has fallen victim to sexism having been in a sport that has been male-dominated for many years. Often subject to rude remarks about the athletic physique of her body, Rebecca is passionate to see that women feel empowered to take part in sports and is a Patron of Women in Sport. Determined to be a female athlete that people look up to, Rebecca is a fantastic motivational speaker and encourages others to follow in her footsteps not letting sexism or negativity get in the way of being strong, powerful and active.

Rebecca Adlington is regularly booked to engage audiences at events, read their latest feedback below:

“Thank you so much for Friday, everyone loved your straight-talking, honest and interesting session. You understood the tone of the event perfectly and all the attendees remarked t how down-to-earth you were and lovely it was when you stayed for photos and chatted with everyone. Thanks again for all the dedication you showed, was much appreciated and the event was a real success”

“Rebecca was a very welcome guest to our Annual General Meeting and spent time meeting our staff and service users before giving an interesting, inspirational and thought-provoking keynote speech. She is a lovely, down to earth person who really connected with people and we were delighted that she was part of our AGM celebrations”

To enquire about Rebecca Adlington for your event or corporate function, simply contact us via agent@female-motivational-speakers.com or call a booking agent on 0203 9158 282.